Having a blast riding fast past the karst

After 22 hours on a train and an overnight stop at the industrial and subsequently touristically (???) deficient town of Liuzhou, we boarded a bus to Yangshuo. Finding the correct bus is always difficult, but more so in industrial towns with no tourism infrastructure and very little English. The written Chinese language is comprised of approximately 8000 characters. Apparently, the average person throughout their lifetime will know 6000 characters and reading a newspaper requires knowledge of about 3000 characters. A few decades ago the Chinese adopted a kind of phonetic writing system to help with foreign communications but it never really caught on and is rarely used or understood among the Chinese people. Luckily for us, we found that many of the Chinese symbols actually look like things. We stood in front of the bus timetable in Liuzhou (with more than a hundred destinations listed in Chinese) with our piece of paper with Yangshuo written on it in Chinese and tried to work out the timetable:
Glenn: The Chinese for Yangshuo looks like the letter B, then a ladder, then a box, then some drawers.
Bec: Right, so we're looking for B ladder box drawers.
Glenn: Yep.
Five minutes of looking later.........
Bec: There it is
Glenn: Nope, that's B ladder CAGE drawers.
Bec: Hmmm, yeah, I think you're right.
Five more minutes of looking later........
Bec: We could always go to tree antenna tree tree and then catch another bus to B ladder box drawers.
Glenn: Good idea. No wait, there it is. That's definitely B ladder box drawers.

We eventually arrived in Yangshuo (aka B ladder box drawers, aka southern China's answer to Khao San Road) and made the grave error of checking into a guesthouse above what turned out to be Yangshuo's karaoke strip. We woke (a loosely applied term when kept awake all night by dreadful Asian renditions of such already dreadful songs as Everything I do I do For You by Brian Adams and Whitney's I Will Always Love You) the next morning to the most amazing vista of karst scenery. 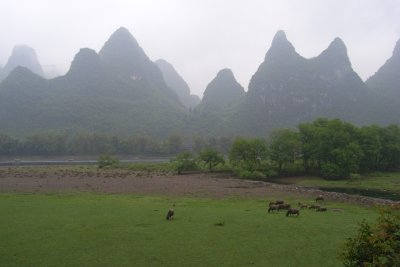 We hired bikes and rode out through rice fields, across bridges and through orange groves and small villages. 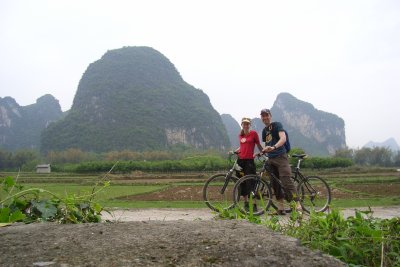 The weather wasn't brilliant, but all the same we decided to catch a local bus up to Xindi and then hike 24km along the river down to XingPing and then take a bamboo raft back to Yangshuo the following day. There's huge business for the locals in bamboo rafts and almost everyone owns one and hopes to make money ferrying tourists around the local area. One local woman even bought herself a ticket on our bus to Xingdi in the hope that she'd convince us before we got there to take a bamboo raft to somewhere else with her. The scenery was amazing, though somewhat foggy, and walking through 24km of mud was well worth the effort. 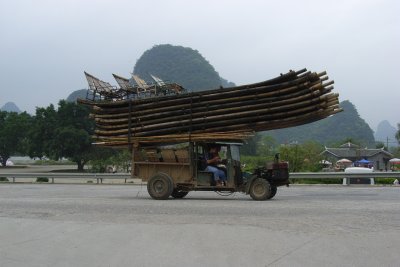 The Longji Rice Terrace was a great day trip from Yangshuo and a fine example of agricultural engineering and creativity. Along the way we stopped at a not-very-authentic local village and met some ladies with incredibly long hair performing some local dances. 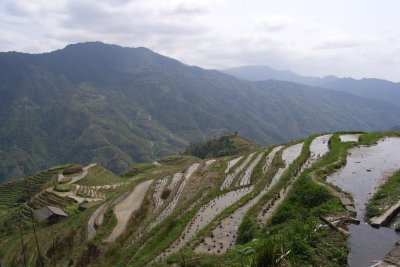 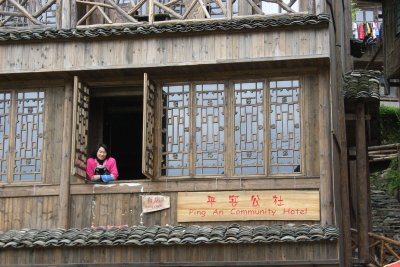 A local at Longji 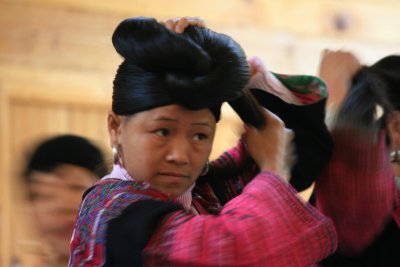 Yangshuo really is southern China's answer to Bangkok's Khao San Road. With dozens of bars, great food, endless outdoor activities and enough neon to outshine an 80s theme party, Yangshuo (or Yangers to expats who've been there longer than a week) is a blackhole for the weary backpacker. Backpackers have been known to arrive but never leave and we spent about ten days there just generally hanging around and doing not much at all really. 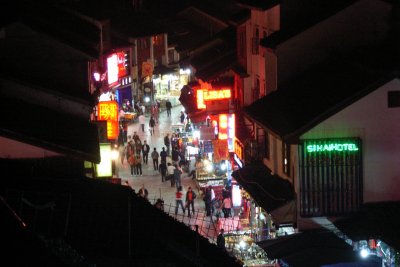 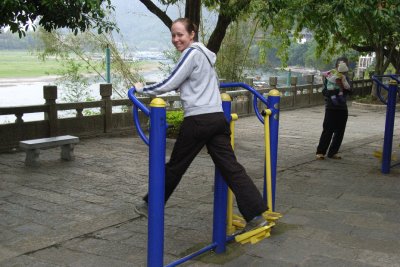 Getting some exercise in Yangshuo 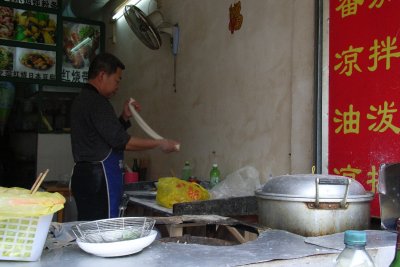 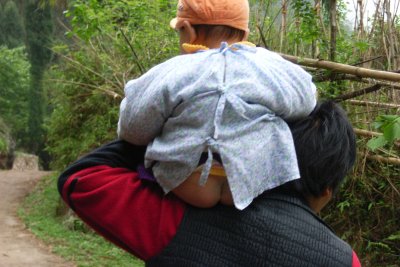 These baby bum-pants are all the rage in China, though we can't quite work out how they're supposed to help!!

We met a Chinese kid called Jo who is ten years old and likes to practice his English on tourists. At first we were a bit suspicious of him (almost everyone wants something from tourists in China) but we soon found he genuinely just wanted to have a conversation in English. Each night he'd find us in whatever restaurant we were in, sit and have a chat, then move on to find his other tourist friends. 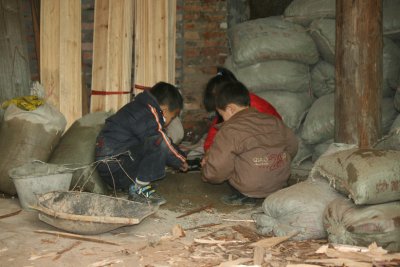 When the time came to leave, we decided to take a sleeper bus to Guangzhou and then fly to Bangkok. Having taken countless trains across China we thought the bus might be a neat experience. WRONG!!!! The bus had short bunk beds in three rows along the length of the bus and we lurched and swayed along through eight hours of Chinese roadworks before being turfed off the bus, tired and nauseated, on the side of the road somewhere in the middle of Guangzhou at 5am. We spent three hours trying to find a Metro station that didn't exist (Guangzhou wins our award for worst signage but most heplful random local of our travels) and eventually made our way to a hostel on the river for the day. Glenn trawled another motorcycle market and Bec caught up on some sleep before taking a late flight to Bangkok to start the Thailand leg of our trip home.

Posted by TDL 18:51 Archived in China

I absolutely love the "B ladder box drawers"! What incredible pics. All the best as you continue your amazing journey.